Always just a little late to the party

A Heavy-Handed Ode to the Clitoris

Puns and a limerick to celebrate a special week. Please enjoy!

Today, I’m so sad to see Clitoris Awareness Week COME to an end. But I’ve decided to show my reverence by trying my HAND at some poetry. Yes, I’m doing some of my CHEEKIEST work as I help people peek under the HOOD of this magical organ. Rather than simply pay it LIP service, I felt poetry would help me go DEEP into the subject matter. I chose limerick form, because, of course, it begins with “L” “I” and ends with “C” “K.” Not to brag, but one friend called me a “cliterary genius” while another said I was a “cunning linguist.” Enjoy.

But grab a tissue. It will be touching.

Ode to the Clitoris

by Aliza Worthington
B.A. and M.A. from Johns Hopkins University 1990

There once was a girl from the city
Who needed to write something witty.
She wracked her tired brain
For something germane
And came up with something quite clitty.

Apparently we lack awareness
Of female sex organs – UNFAIRNESS!
But at this fine hour,
We now know the power
That lurks beneath our underwear-ness.

The clitoris is like the penis.
It’s true, despite it’s outward wee-ness.
It’s eight inches long,
(That’s more than a dong!)
But most of it’s inside your she-ness.

This organ has eight THOUSAND small nerves!
So, careful when tasting the hors d-oeuvres…
Ensuring your friend
A real happy end.
Please show it the respect it deserves.

We don’t know if it’s reproductive.
But here’s some advice that’s constructive:
For problems spousal,
Work on arousal.
The clit’s good for feeling seductive!

* Though Clitoris Awareness Week is meant to be light-hearted in tone, it originated with a group’s very serious purpose – helping female victims of genital mutilation. Click here to learn about Clitoraid.

**This poem was a winner of a 2015 BlogHer Voice of the Year Award.

The Worthington Post is moving to a bigger house!

Here’s the deal – For four years I’ve been nurturing this writing thing, and 2+ years ago it turned into this blog here on WordPress.com.  It allowed me to write what I want, when I wanted, cost me $0, and kept it simple.  That last part is huge for me, I might add.  I never got into the notion of moving it over to WordPress.org, which would allow me to have ads and other monetary transactions (like, if I ever wrote a book or wanted to sell something else,) but would also mean I’d have to be involved with the behind-the-screen stuff way more than I’m interested in being.  I know my technological limits.  They were reached when we got a push-button phone and call-waiting.

The blog has grown slowly…slowly…still slowly, but impressively enough that the WordPress People who helped me out at a conference looked, and said, “Whoooooa…you have that many followers?”  I said, “Yeah, why?  It’s a lot?”  They said, “Well, yeah – and it’s unusual on a WP.com site.”  I said, “Really?  Why?”  They explained, “Well, when a blog URL has ‘wordpress.com’ in it, it seems kinda…well…like you’re telling everyone you’re an amateur.”  I said, “Really?  Oh, well…I guess people don’t mind I’m an amateur.”

But after two happy years at WordPress.com, I’m following my friend, John Shore, over to a bigger house.  Patheos.com.  (Patheos.com is also a WP site, btw – but one of those more professional, people-who-know-what-the-hell-they’re-doing-type of WP.org sites.)  The Patheos tagline is “Hosting the Conversation on Faith.”  John moved his blog over there, and he oversees the Unfundamentalist Christians page on Patheos, too.  You can see if you poke around over there that they have dozens of religious “portals.”  The variety perspectives is staggering – and quite a few of them don’t have much to do with religion at all.  I’ll be at the Patheos Jewish portal. As you know, a fair amount of my writing explores my experiences as a Jewish kid from Brooklyn, married to a Catholic guy from Baltimore, with three kids who are like, “Whatever.”

Content will remain the same – I’ll still be writing on plenty of topics from ridiculous conversations with my 4th-grade son to sarcastic and/or thoughtful take-downs of things that aggravate me to the random movie or book review.

The blog will look kind of different – Patheos is a big site with hundreds of thousands of readers, so there are ads on the sidebar, etc.  So sorry about that.  (That’s one of the things I liked about my blog here – simple and easy on the eye.)   The trade-off is they will pay me once I start getting a certain number of page views.  Not much, but I get to keep all the rights to my work, and have complete control over what I publish there.  Just like here.  Did I mention they have hundreds of thousands of readers?  They won’t all flock to MY blog – they’re there for their own thing, ya know?  But chances of more eyes on my writing increase dramatically.

They are keeping the general look of The Worthington Post you’ve come to know (yes, that picture of the block structure my son built will still be the header.)  And they’re keeping my categories – Life, Liberty, and Happiness.  And they’re keeping all my subscribers.  Yes, if you’ve signed up to receive an e-mail whenever I publish, you will continue to get those emails.  The web ninjas over at Patheos have transferred you all over.  You don’t have to do anything!  Isn’t that NUTS?????  How do they DO THAT STUFF???

I once had a conversation with John a while back before this prospect of moving the blog came into being.  He asked me what my goals were for my writing. I said, “uuuuuuuuuuuuh…” because that’s what I do when people who are smarter than I am ask me simple questions.  He kindly helped me along, saying, “Well, based on what I know about you, I’m guessing you’d like creative control over your content…”

John:  “And you’d probably like to be read by the largest audience possible…”

John:  “And it wouldn’t hurt to get paid for it, either.”

Well, when Patheos approached me about moving my blog, I was hesitant, because I resist change.  It requires work.  Then I thought about what John said months earlier, and how he helped me articulate what mattered to me, and how a move to Patheos embodied those priorities exactly.  Worth it.  So, here we go!  Come over to my new home!  (Housewarming gifts completely unnecessary, though I have been DYING for some new towels.)

…and if you’d like to know how I’m feeling about that, please click over to Scary Mommy to read “Double Digits.”  I’m beyond excited to be on that great site by fellow Baltimorean, Jill Smokler.  🙂

My Strange Reaction to “The Book Thief” (Spoiler Alerts, People)

I went to see “The Book Thief” with a friend a few weeks ago. I knew nothing about it except it was set in Nazi Germany and involved a girl joining a new family.

My friend and I discussed how we really do enjoy seeing a movie knowing little about the plot, as we like to see it unfold before us with no preconceived notions, and our reactions are genuine – usually finding delight in letting the storyteller take us to places we don’t anticipate. It’s a little like having a trusted friend lead you around when you’re wearing a blind-fold.

As the movie progressed, I felt as I expected – loving the good story, wanting to know what happened next, in awe of the amazing acting of Geoffrey Rush and Emily Watson – not to mention those marvelous child actors, Sophie Nélisse and Nico Liersch. I was lost in John Williams’ magnificent musical score, and impressed with the director’s ability to convey horror without gore. END_OF_DOCUMENT_TOKEN_TO_BE_REPLACED

Not Smarter Than a Fourth-Grader

This morning on the way to school, my fourth-grader and I had the following conversation.

Him:  Did you know sloths move so slowly that sometimes they mistake their arm for a branch, reach for it, and then fall to their deaths?

Me:  Sloths have arms?

Me:  Sloths don’t have arms.

Him:  (disbelievingly) Yes, Mom!  They have REALLY LONG ARMS!

Me:  I know what you’re talking about.  Sloths.  Sloths don’t have arms.  Do they?

Me:  Stop SPELLING it.  I KNOW what you’re talking about!  Sloths have arms?  I never knew that!

Him:  (disbelievingly) HOW DID YOU NOT KNOW THAT???

Me:  I really think they don’t.  I’ll have to look it up when I get home.  That’s really interesting.

You see, that entire time HE was talking about sloths, he saw this animal in his mind.

The entire time I was talking about sloths, and insisting he didn’t need to SPELL it out for me, I was seeing this animal in my mind.

In my defense, they are both very slow-moving animals. 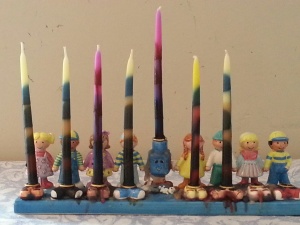 I’m a little late with this post, as it’s already the sixth night of Chanukkah. You may have heard (if you don’t live under a rock) that it coincided with Thanksgiving this year, and travel, and blah, blah, blah – so apologies for tardiness. However, it is NOT too late to discuss the nuttiness that surrounds these winter holidays.  In particular, I’d love to address addressing. Not as in envelopes, but as in in greeting people.  Specifically, in greeting ME.

She’d been asking for years.  My firstborn, with the red hair and creamy skin, wanted a tattoo.  For years she’s been asking.

END_OF_DOCUMENT_TOKEN_TO_BE_REPLACED

Author’s Note:  I wrote this a couple of years ago for my local Patch blog.  In light of “The View’s” recent “discussions” and comments about Jews – you can read about it here and here – I thought it was worth re-publishing. 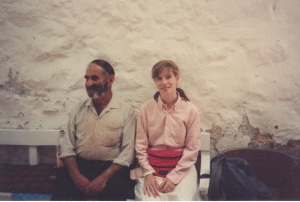 Me with a tiny man outside tiny synagogue, outside Orthodox quarter of Jerusalem. June 1990.

Perfect!!!  I thought of this about a month or so ago as a way to describe my religious life/beliefs, such as they are.  Jew-ish.  “Ish!”  It’s right there in the name!  I’m a Jew.  Ish. Kinda in the middle – sorta…

Why I’m Cheering for “Popular Science”

A little over a week ago, Popular Science published an article called “Why We’re Shutting Off Our Comments.”   In it, the magazine announced that, from now on, it would no longer allow comments on stories it publishes online.  An old friend from college posted the article on Facebook, tagging me and a few others asking our opinions on the decision.  My response was this:  “You had me at the title.  I don’t even need the ‘Why’ at the beginning of it.”

I can imagine the protests to come – calling the decision outrageous, violations of the First Amendment, cowardly, etc.  To those accusations I already had my pat reply: that what is really outrageous is the online culture of stupidity and meanness so pervasive in what is attempting to pass for internet discourse.  First Amendment rights do not entitle people to say whatever they please behind the anonymity of their computer screens about whatever they please and be heard by a particular organization’s audience.  Cowardly is more accurately descriptive of spambots, trolls, and first-generation-uprights who take every opportunity to sabotage any semblance of conversation begun by an author’s original piece. END_OF_DOCUMENT_TOKEN_TO_BE_REPLACED

You Must Buy A Gun! Except, Not Really.

I learned by watching Bill Maher, that not one, but two towns in Georgia have laws requiring – requiring – heads of households to own a gun.  Kennesaw, GA has had its law on the books since 1982.  In a city of almost 30,000 people, the following law states: